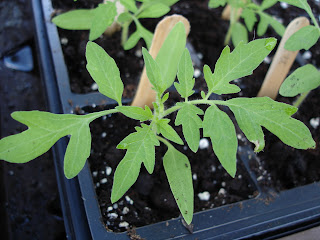 I spent a very pleasant sunny morning this week inside my greenhouse. I was listening to Radio 4, pricking out my ickle seedlings. Seedlings should NEVER be handled by the stalk, always by the seed leaves or a root ball. The tiny hairs up the main stem of a tomato seedling can actually develop into roots, and some schools of thought say that you can plant them right up to the first set of seed leaves. I must admit, I did plant them about half way up the stem, but they did look a bit sickly for the first few hours - they fell right over and looked like they might transpire. The next day they were standing up tall and straight in their new home.

My early mangetout peas are up, so are my broad bean Express. Chilli seedlings are looking good, as are the Aubergine Enorma which I planted back in January.

Every year I try something different. I bought some Asparagus Pea seeds, and sowed a few in the greenhouse. They look like they are related to sweet peas, you pick the pods when they are only 1" long (sorry don't do metric!) and they are supposed to taste like asparagus. I have heard mixed opinions about them. Has anyone tried growing them, I would be interested to know. 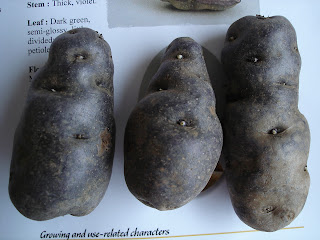 I went to Borough Market yesterday. Anyone who lives near london must give it a visit one day - it really is a foodie (and veggie) heaven! Situated underneath Southwark cathedral, near London Bridge station. Any sort of fresh fruit and veggies you will find there. Don't have anything to eat before you go, there are lots of freebies - cheeses, sausages, olives, choccies, cakes from all round the world.

There was a fantastic display of potato varieties in the veggie market. This variety was labelled as 'Black Truffle' from Brittany, France. After some research on the internet this afternoon I discovered the world of French potato growing and cultivating. Those clever Froggies have literally hundreds of potato varieties to choose from. These are known as the variety 'Vitelotte'. I noticed that they had just started to chit (that means sprout, Porl !) so I thought I would buy some to plant. I wonder if they are related to Char-lotte??

Just thought I would also mention here, that I have given up visiting major supermarkets for Lent. I detest the way that supermarkets are raping the countryside, destroying our old tasty English varieties and screwing the British farmers, all for the sake of their own profits - and not the customers. I will be patronising every farmers market and local shop from now until Easter. Anyone care to join me?