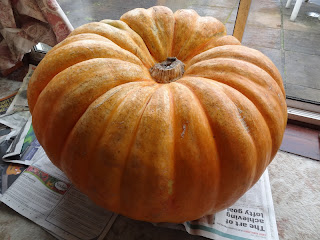 With a little help I managed to get my prize winning giant pumpkin indoors and avoiding the nasty weather outside. But what on earth am I going to do with 191 pounds of it? 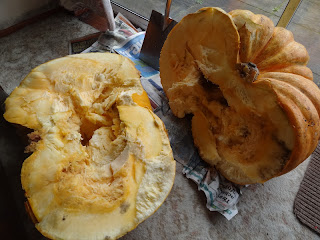 I had to use a garden spade to break it open, If that didn't work I was headed for the garden shed looking for a power saw! 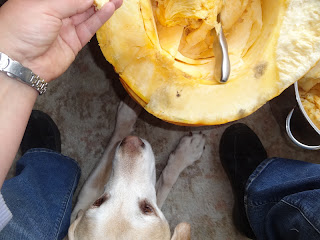 Well, as you might expect I had an audience as I was cutting it up. 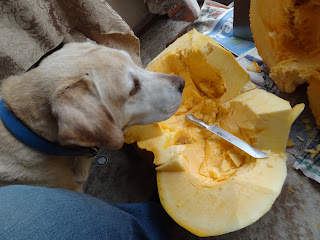 Of course I managed to cut my finger whilst doing so!  Life is so much more difficult without the use of one of your thumbs, don't you think? 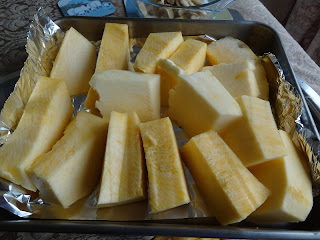 So I managed to cut up and de-seed only a fraction of it.  Into an oven to cook it and hopefully drive off as much of the water as I could.  This is a very wet, sloppy pumpkin with not much taste I'm afraid.  About as much taste as a marrow and the same watery consistency. 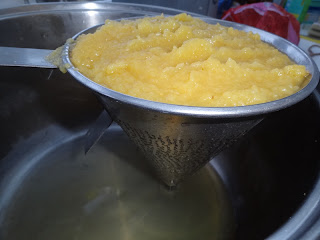 So after sieving pounds and pounds of it, I am leaving it for at least 24 hours to drain away some of the liquid.  There is just going to be tons and tons of it, I will give some away to neighbours, freeze some, make soup, make chutney, pumpkin pie.. but alas, quite a bit will be given to my lovely compost worms!! 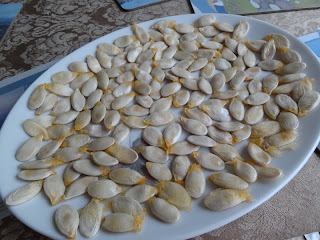 Well, it is not all bad news.  This pumpkin was pollinated from a male Queensland Blue squash flower.   So this means that with a little luck and a following wind.. Matron may have bred an interesting hybrid for next year.  How do you like the sound of 'Matron's Queensland Giant'?  A giant pumpkin crossed with one of the most tasty and best textured pumpkin?  A giant and fantastic tasting pumpkin? who knows.  I am planning to set up a 'Just Giving' page and sell these seeds to raise money for my favourite charity Hounds for Heroes.  Keep watching this space! 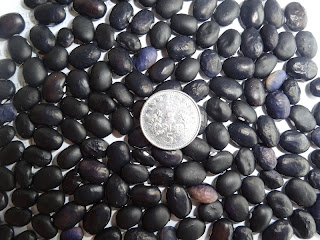 I am still picking and drying some of my lovely little 'Negrito' black bean seeds. 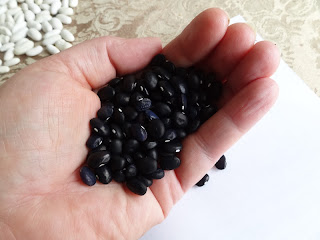 Very small little beans which are usualy found in Hispanic recipes such as black beans and rice. 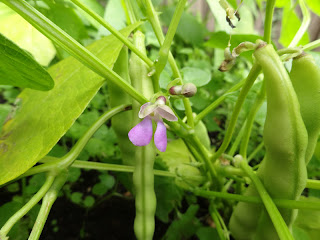 Beautiful violet flowers on compact bushes, and these little bean pods are short but very prolific. 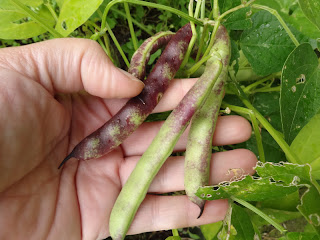 The pods seem to dry to different colours from dark blue to pale green, but perhaps we haven't had the best of ripening conditions this Summer eh? 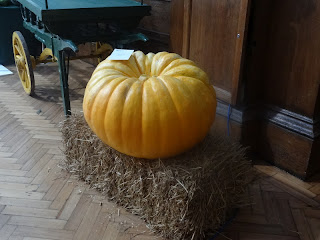 Pumpkin arrived safely at the RHS London show. Lots of burly sorts with straps, forklifts, and all the necessary equipment to cope. 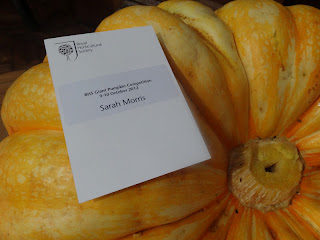 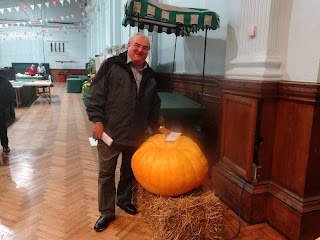 And I get to meet Royalty!! well.... that is vegetable Royalty in the form of Mr Medwyn Williams, Chair of the National Vegetable Society and a long time hero of mine! 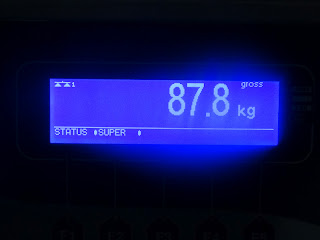 On to the scales and weighed quite a decent 87.8 kg.. which I don't understand. So a ready rekoner tells me that a kilo is 2.2lbs so... Matron's pumpkin weighed in at 193.5lbs... I was feeling pretty pleased with myself until the big girls arrived... 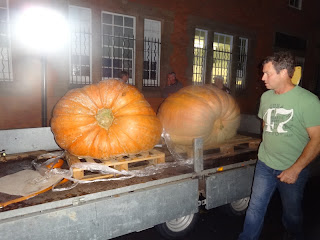 So along came Ian Paton with his two big girls!  About a ton each! The Paton Twins, Ian and Stuart hold the British record, so they are certainly 'Pumpkin Royalty'.   So weigh in is now complete, I wait until tomorrow.....